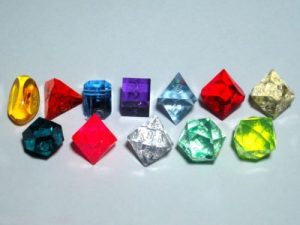 DCC is a game that tries to emphasise Playing out the use of skills instead of relying on what I call the “Package deal” skill set by class or the “Every skill we can think of!” Skill systems of other RPGs.

If your character can justify why they should have a chance at any such skill roll they will usually at least get a shot at it. So detailing your background and remembering past experiences in game is a very good idea as it gives you justification for “skill use”

Basically if your character can describe what they are doing they can do it. If there is an element of doubt or the description is less than ideal then a Skill check MAY be appropriate as a deciding factor.

The GM has just described to you what appears at first glance a fairly empty 10’x 10′ dungeon room. It has a layer of dust on the floor some inches thick and several unidentifiable lumps in the dirt indicate there may be some things lieing in it. In his notes he has that there is a bag of gold hidden under a loose floor stone in one corner.

Option one: Party says “We search the room” No description just that simple statement. Well roll a DC 20 Pass that and you can have the gold

Option Two: Party states they are sifting through the dust and probing it with the butts of their spears etc. This is better as they are focused on the floor, +1 Xp for thinking to be alert for traps/hidden pits etc and their is a heightened chance of tapping on that hollow stone so DC15 to find it. If there was an Old Mantrap set here under the dust this would find it automatically

Option Three: Party states they are tapping for concealed/hollow places in addition to the above. Ah hah! now were getting somewhere, anyone stating they were doing this in the corners would AUTOMATICALLY find the gold. No skill check needed. If such was not specifically stated DC10

Option four: Party asks if they can tell what the room was originally used for, I say it looks from the general shape and the small clues from the visible debris that it looks like it was a Servants bedroom or some such. A party member that had a “Servant” background states they are looking for any hidy hole where a servant might have kept stuff away from their masters. = AUTOMATIC success no roll needed.

From the rule book. DIFFICULTY LEVELS
Some tasks are harder than others and DC allows us to gauge this.

It is to a players advantage to avoid skill checks by clever Role Play as a general rule as the Dice as we all know can be a terrible foe to the best of characters! So if you can describe doing it do so! Why risk a dice roll if you don’t have to! Remember all you heavily armoured types Heavy Armour puts a negative on many skill checks. Avoid suffering this for you tank by good RP.