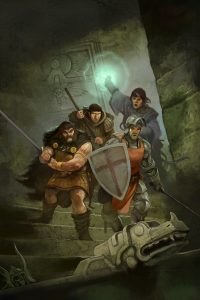 DCC is a game that tries to pare back to basics leaving the GM to make calls on grey areas instead of “having a rule for everything”, and as such actively encourages individual GM’s (& players) to customise their Game world and Player characters via their own imagination.

This is good as far as I am concerned (Why else would I like the system otherwise eh!) but I realised a while ago it could also be a bit of a step for folks used to the “Package deal” a class system Like D&D. So here I am gonna drone on about somer of my ideas that I have had or seen others use to jump start the imaginations of anyone that gets stuck or wonders How to get the character they have in mind played out.

DCC uses a basic set of 7 “Archetypical” classes. The Original four (Warrior, Mage, Cleric & Rogue) plus three hybrid classes designed for the most common NPC Races used in most fantasy settings (Elves, Dwarves & Hobbits) In play tests this worked surprisingly well, provided the players were aware that how they played their supposedly identical Warriors, for example, would be rewarded and allowed for. In one meeting we had a “Paladin” and a “Barbarian” in the same group both the same level of Warrior class but so distinct and interesting to role play with. These players had simply picked up on their Birth Augury role and tailored their character concept to it better than most.

So think it over for a while. Just how many books/films or other mediums have we all seen where they contain easily identifiable members of the original four classes. Were any two exactly the same? I doubt it, your warrior doesn’t have to be either. With a bit of effort noting down who they are (as opposed to what skills we are handing them) we will have a basis for allowing them to either simply do stuff or at the least make a dice check to achieve that action.

Simple example: If you define your character as having served in the cavalry. In this game they will AUTOMATICALLY be able to ride and ride well. No skill check needed, over time they can “teach” other party members to be decent riders. If charging an enemy other characters may take penalties or need to make agility checks you just wont need to or in rare cases will have an easy check when everybody else has a hard one.

So say you’d like to play a Rogue but maybe wanted to be a bit better at fighting than the standard version. Play a Warrior instead but state you grew up on the mean streets in a gang. If you try a basic bit of pick pocketing with a warrior with a decent backstory like this I’d happily allow it. Now so the Rogues don’t get upset you really have to go some to explain why I should allow such a character to attempt to pick a lock as well.

But then had they been a locksmiths apprentice for a while, that would not be an issue to let them at least try… But then you have added another layer of depth to your backstory. We all win. With a bit of creativity you will be able to write in the facets you want in this character without having to bog us all down with yet another character class.

Exceptions to the rule:

The one area I thought personally DCC missed was the Psionic or Martial Arts based warrior. To fit that well accepted Archetype you need somebody who can fight BUT does so with some magical or near magical powers thrown in. Well you might be able to make the Cleric Archetype fit in and around that I know. Its not a great fit, and what about the good old “ninja” types?? Clerics they ain’t not by any stretch I could see.

So I proposed to the design team a “Mystic” class (one size fits all that allows for Psion like characters/ Kung Fu Monks & Ninja’s all depending on how you define them) The final concept got quite far along but not quite to the final rule stage. But as I have some of my notes and my own personal campaign world Kinda has “Mystics” as an integral type/organisation in some parts I am adding it back here as an optional class if anyone feels particularly bold.

After some consideration I am planing to do write ups of a couple of Race/Classes that are specific to my own created Game world of Aruin. Work on these will be sporadic as it doesn’t add to the existing game per say. But I’d like to include it for completeness on this website. For those interested. they are The Kazen “Wanderer” which is the race class for the semi nomadic Giant Feline race of my worlds northern continent (Think Snow leopard/Lynx Barbarians possibly with a touch of Samurai for good measure…) and the Gor’Bayen “Lightbringer”. These are the Fire Goblins of my world and are master Alchemists and servant of their goddess of the deep fires… So its a clerical variant with Alchemical secondary powers.

Everybody has “skills” in game and in real life. We dont usually think of them as such but we have them nonetheless. Can you swim? Skill! Can you drive? Skill! We forget that reading and writing in a medieval setting are very sought after skills that Most folks do not have! As I allude to above, define that character in as much detail as you dare! (honestly; I doubt anyone playing this is nuts enough to try and persuade me that they were apprenticed to nine different masters and learned basic magic, while studying to be a Gladiatorial warrior…. Try it by all means, but you’ll have to Ace that character back story to get anything practical 🙂 ) Doesn’t have to be epic prose, just some coherent notes will go a long way!

Bottom line, put stuff into your Character get more out of it. Also more you invest with the Character the less you want them to die and should therefore play better yes? Contrary to popular opinion: I dont want you to die either, I just want you to be scared you might if you screw up… 😀