As this is your destination I am going to give you this background of your first port of call. After all you will have had six weeks of travel to get there and somebody must have asked the captain or crew of the vessel about the place. Other areas you move to you’ll need to gather your own information in game. 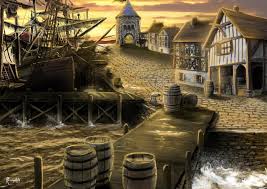 As the name suggests the Town is comparatively new. Sometime in the last fifty years or so the largely Human population (Imaginatively calling themselves “The Sandlanders” from their lifestyle of Coastal fishing and farming the dry sandy soil of the lands about the area) Were forced to move their founding settlement further north. You have heard this was because of an attack or series of attacks by the Lizard folk that infest the adjoining Salt Marches.

A few unspoken hints and strange expression on locals faces if questioned about it suggest that the loss of the settlement was not the the greatest disaster of the Lizard folk attack. Its obviously a sore subject and finding out more will need to be done with some diplomacy.

The Town itself is a walled port affair. The defences look strong for its size, maybe even a little over the top. It is surrounded by a half dozen small hamlet sized villages that send in crops & Livestock once a week or so for trade. Rumour has it that the largest of these villages also has a small band of Clerics from a rival sect trying to set up a chapel or something there much to the displeasure of the official church of “The Eternal Flame” resident in the town itself.

The population is at least 85% Human maybe 10% Halfling and the rest a mixture of Goblins (Gor’Bayen) and other non humans making up the last 5%. A Gor’Bayen stalking through town might raise an eyebrow but no more than an Elf would, they are not to be attacked unless you want to make an enemy of the local Sherrif.

The Sherrif is a Human lesser noble of some sort, you should probably present your Warrant to him before you do anything precipitous. Also the Local Church is pretty militant as well. They are known as the “Cult of the Eternal Flame” but that’s pretty much all you know about them. They favour weapons and armour adorned with Bones so they are probably not Paladins…

You have been very directly informed that they (and indeed the whole town) are VERY big on Crime prevention here. Thieves don’t get whipped or the stocks or even their hands cut off. Nope they get Killed after a Priest Supervised trial and their heads chopped off! So be aware! Mind you this probably means they won’t haggle of paying your Wanteds either… 😀

This makes this quite a strange choice for any of the Villains on the warrant to have holed up in, or more likely near. Unless that was somebodies idea to throw off any pursuers? IE Land in a place known for a strong stance on Law & Order too fool anyone after them? Maybe Maybe not, its a possibility but unless one of them planned to turn over a new leaf and restart their life as a farmer or fisherman its less likely they stayed in town for any length of time.

The main exports of the place are a speciality dried fish caught in the local bay and a kind of Tobacco made from the reed like plant that grows in the Sandy dunes all along the coast here. This last is actually quite famous

This “Tobacco” is quite famous “Viraguan reed” comes in several different grades the very best of which are reputedly to be almost magical and or hallucinogenic. None of you had any idea that this was where it came from, the stuff is normally too rare on the mainland to be available to low level adventurers! But any pipe smokers among you (Dwarfs/Hobbits??) will have at least heard of it!

The common reed (Viraguan Brown) Serves as plain Tobacco but with a nicer aftertaste than the common “Pipeweed”. Here its about 10 Cp per oz

Viraguan Green is uncured and often used as a snuff or chewing tobacco equivalent. Cost 5 Cp per Oz

Viraguan Gold is Incense quality and while you may have heard of it none of you are likely to have seen it let alone smoked it. Its supposed to have a “Relaxing” effect on the body. 1 oz of this is worth about 5gp

There are at least three more grades of this powerful and strange herb you soon discover but for more details you’ll have to do some research of your own. Naturally the locals make up all sorts of blends of the stuff, but the export grades are always in a pure grade.
To purchase Any of the above on the mainland you’d easily have to spend TEN TIMES the amounts shown above…