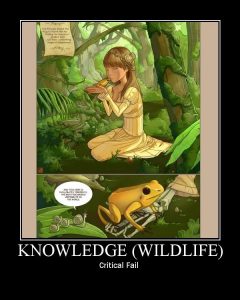 The DCC system attempts to make actual magic extremely chaotic and powerful but also Kinda rare. I personally noted that this makes some players less interested as “collecting magic Items” was part of their fun in a RPG. So to overcome this I present some guidelines for the terminally interested on How Magic and “Special” items will work.

While a true magic sword might be kinda rare, it is eminently possible that you will find items that are a bit better than “Standard” if you are familiar with the term “Masterwork” from D&D you’ll get the idea. SO expect “Non Magic” items that carry a +1 or +2 bonus on some stat in a good haul of treasure. Many enemy boss type figures mat well have a +1 armour or weapon etc.

I ran across the term “Fine” item so have decided to appropriate it here. Consider the prefix “Fine” to indicate a NON Magical +1 on the item to which it relates. “Masterwork” or “Masterful” will refer to non Magic +2 items hereafter.

Likewise Potions need not always be “Magic” you may find a rare “herbal elixir”* that acts as a Healing potion or similar but will NOT detect as magic in any way. So don’t rely on a “Detect Magic” or similar spell to pick out the goodies in any reward. You will have to trust your Rogue or similar Character with a merchant or other appropriate background to pick theses out of the pile of booty for you!

*Special Note.Due to the wholesale butchery of any rare & magical monster this rule brought on in my last campaign… May I just repeat if you don’t have a background that includes “Alchemy” “Herbalism” or “Animal Handling” Chopping bits off a defeated magical beast is 99% likely to NOT get you a usable “Component”. Naturally they are there but without knowledge aforethought you are wasting everybody’s time. Research what “Potion” you want first THEN I’ll tell you what you need to go out a hunt Okay!
This Rule brought to you by The FCB Basilisk hunters 😉

One thought on “Magic and Not Magic”