OK to make it easy I am streamlining the Character creation stuff and posting it here from the PDF Rulebook. I may insert explanatory comments thus [This is an explanatory comment!] in the text to help you get on. If its in normal text its from the rule books. 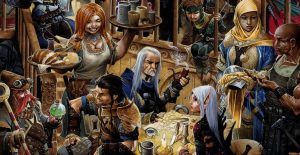 ABILITY SCORES
A character is defined in broad terms by six ability scores. For character creation, roll 3d6 for each ability score listed below, in the order of Strength, Agility, Stamina, Personality, Intelligence, and Luck. [You do not get adjustments for race, you may elect to play any of the “classic” races (Dwarves Elves Halflings Humans) at will OR take the recommended option of making up your quartet of possible characters and allowing the Dice to choose if any of them are Non Human. If you select a Non Human start then I will assign you a background depending on how you tell me you want to develop your character. Don’t worry I’ll try and pick something that roughly fits into your concept!]

You always roll 3d6, and you always roll and apply the scores in that same order. You do not roll more dice and drop the lowest die, you do not use a point-based buy system, and you do not assign ability scores in any order other than that defined above. [This is the reason it is advised to do 4 Proto-characters to start and pick the best overall set (that fits your desired character concept) to concentrate on. In DCC the game focusses on what you can do with whatever chance throws at you. You are less dependant on “Mega Stats” than some games. Basically if you play well – including playing your weaknesses appropriately – you will be rewarded (Plus it should be pretty entertaining!)]

Your score of 3-18 includes a modifier, as shown on the table 1-1 below. This modifier applies to select rolls as described below. [Prime stats are STR for Warriors, AGIL for Rogues PRE for Clerics and INT for Mages as you would expect. STA & LUCK are good for all character types]

Strength: Physical power for lifting, hurling, cutting, and dragging. Your Strength modifier affects melee attack and damage rolls. Note that a successful attack always does a minimum of 1 point of damage regardless of Strength. Characters with a Strength of 5 or less can carry a weapon or shield but not both.

Agility: Balance, grace, and fine motion skills, whether in the hands or the feet. Your Agility modifier affects Armor Class, missile fire attack rolls, and Reflex saving throws, as well as the ability to fight with a weapon in each hand. [Recommend a 14+ Agil to attempt 2 weapon fighting unless you are a Halfling – they get this as a racial special here]

Stamina: Endurance, resistance to pain, disease, and poison. Your Stamina modifier affects hit points and Fortitude saving throws. Note that a character earns a minimum of 1 hit point per character level regardless of Stamina. Characters with a Stamina of 5 or less automatically take double damage from all poisons and diseases.

Personality: Charm, strength of will, persuasive talent. Personality affects Willpower saving throws for all characters. Personality is vitally important to clerics, as it affects the ability to draw upon divine power and determines the maximum spell level they can cast, as shown on table 1-1. [For non clerics this is as close as you get to a “dump stat” in DCC. Still its pretty useful for all Character types]

Intelligence: Ability to discern information, retain knowledge, and assess complex situations. Intelligence affects known languages for all characters, as described in Appendix L. For wizards, Intelligence affects spell count, as noted on table 1-1. Intelligence is vitally important to wizards, as it determines the maximum spell level they can cast and influences their ability to learn new spells as they advance in level. Characters with an Intelligence of 7 or less can speak only Common [Or their racial tongue!] , and those with an Intelligence of 5 or less cannot learn to read or write. [You won’t automatically know how to read and write unless you have a 12+ INT. Even then you may not be literate initially with all your languages.]

Luck: “Right place, right time” – favor of the gods, good fortune, or hard-to-define talent. After rolling 3d6 to determine a player’s luck score, roll on table 1-2 to determine what rolls’ are affected by the character’s Luck modifier. This “lucky roll” is always modified by the character’s Luck score (for good or bad) in addition to all other normal modifiers. In some cases the “lucky roll” is completely useless because the character chooses a class where it is not applicable.
Luck also affects critical hit rolls – positively for the character, and negatively for his foes. In addition, Luck modifies a different element of play for each character class, as described in the class descriptions.

Characters can burn off Luck to survive life-or-death situations. Any character can permanently burn Luck to give a one-time bonus to a roll. For example, you could burn 6 points to get a +6 modifier on a roll, but your Luck score is now 6 points lower.
Players would be well advised to understand the goals of gods and demons that shape the world around them, for they are but pawns in a cosmic struggle, and their luck on this mortal plane can be influenced by the eternal conflict that rages around them. [Rogues and Halflings playing their racial special class, have limited ability to regain luck and so may do this much more frequently than other Types]

Due to the lack of Luck new characters have consider your Birth Augur to give you a base +1 on the listed trait PLUS additional mods equal to your current Luck Mod.

* Luck normally affects critical hits and fumbles. On this result, the modifier is doubled for purposes of crits or fumbles.

MUNDANE OCCUPATION
Your character once toiled away at mundane tasks, and his family and peers still do. Whether alongside his family or apprenticed to a master, his former occupation provides some set of skills – useful perhaps only as a fallback when he emerges crippled from the dungeon, but useful nonetheless. These skills also include training in a rudimentary weapon of some kind. Roll d% on table 1-3 to determine a character’s background. Unless noted otherwise, a character is human.

Note that a character’s occupation need not be determined randomly. If a player has a strong sense of the character’s background in mind already, he should feel free to use it. Starting trained weapon and trade goods can be determined thematically with the judge’s approval. [I totally agree with this, please feel free to come to me with a character sketch and we’ll agree on the closest background. However no more than one “Custom” background per player. If you make up multiple toons you can customise the one you favor most but we’ll randomly generate the rest for speed. So I suggest you do your 4 sets of stats pick the most favorable one for this treatment.]

ALIGNMENT
In the beginning there was the Void, where the Old Ones dreamed. In their dreams were Law and Chaos, inherent forces of unity and entropy. Through endless opposition, these forces of unity and entropy elected champions who became gods, who in turn formed planes of existence that reflected their principles. On one such plane resides your trivial existence, tiny next to the vastness of Arune, even tinier next to the vastness of the cosmos. But you are connected back to the greater universe and the endless struggle by a fundamental choice: do you back the forces of Law or the forces of Chaos?

Alignment is a choice of values. In its simplest form it determines behaviour. In higher forms, it determines allegiance to a cosmic force. Characters choose an alignment at 0 level, and it determines their options for the rest of their life.

Alignment functions on many levels, but there are two primary extremes: lawful and chaotic, with the balance of neutrality between. A character chooses one of these three alignments at 0 level.

Lawful characters believe fundamentally in unity and prioritise the values of mankind: order, authority, loyalty, and charity. They support organised institutions and “do what is right.” They have a moral conscience which points them toward the appropriate action. There are many shades of lawful behaviour, and not all lawful characters will agree on the same course of action at any time. Fundamentally, lawful characters choose the path of mankind over the path of supernatural dominance. At the higher levels, lawful characters find themselves interacting with celestials, angels, demigods, and powerful Lords of Law.

Chaotic characters believe fundamentally in entropy and seek constantly to undermine or rule those around them. They are willing to undermine the natural order of things – including established governments, guilds, and relationships – if they see a material benefit in doing so. They are open to agreements with supernatural powers, even if such agreements risk the primacy of man by allowing strange beings into the material plane. Fundamentally, chaotic characters choose the path of greatest personal power and success over any greater principle. At the higher levels, chaotic characters find themselves aligned with demons and devils, sinister monsters, extra-planar creatures, and the supernatural Chaos Lords.

Neutral characters have not taken a stand between Law and Chaos. Neutrality is the balance of nature, of timelessness and the ocean, and other such things. It can also reflect the neutrality of those who came before Law and Chaos: the Old Ones, the great Cthulhu, and the empty Void, and the emptiness of the time before gods. Neutrality between Law and Chaos can reflect a measured morality – balancing costs and benefits, without strong principles one way or the other. It can also reflect ambivalence or indifference. Fundamentally, neutral characters choose a path not on loyalty or values but by evaluating each and every opportunity that comes along. At the higher levels, neutral characters find themselves aligned with elementals, extra-planar un-dead, and astral and ethereal beings.

The eternal struggle between Law and Chaos is real. Gods and demons battle on other planes for superiority, and the actions of man give those gods power. Make your choice carefully, for it will become increasingly important as you become more powerful.

[OK thats it that should be enough for you to get the basic character started. If you are certain of what class you’d like to play; great pick one of your rookies and we can either:

Below is a Base Character sheet and the link below that leads to a PDF that will print out 4 Mini Sheets suitable for running a group of 0 Levels in their trial by fire first adventure 🙂 Good luck!] 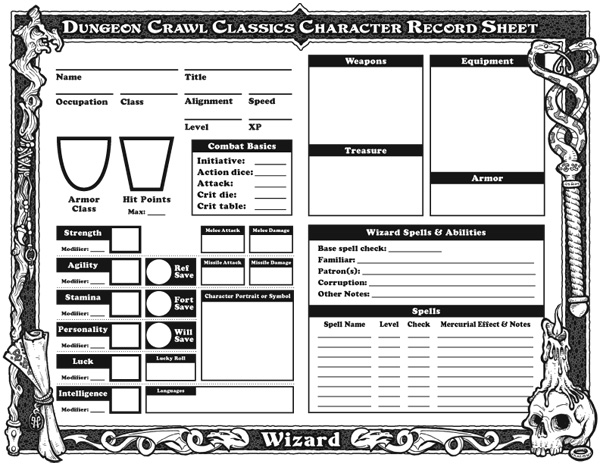