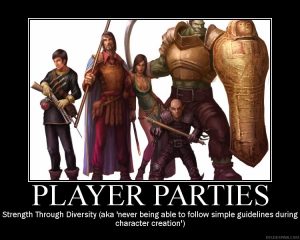 The idea I have here is that we’ll have 6-7 “Active” players in each dungeon/mission. Roughly the same again will be in a Base camp near the start of the current adventure, administered by Patron of the Merc company’s agent : Axel Grimwarden.

So if you will, your PC’s form the regular “Away Team” of the whole detachment. Grimwarden’s crew will be doing something unspecified out of sight but will occasionally put in an appearance. Likewise if a Character has to be retired for a session when somebody can’t make it. They can be assumed to go back to Grimwarden’s group with a “Progress report” or similar excuse. And of course if somebody new shows up they can be assumed to be playing somebody from this support team for the duration of the session.

“Guest” and occasional characters and the other NPC’s will level at a slightly slower rate than the part automatically, but in case of a death they will at least not be so far apart in power as to stand no chance if they suddenly replace somebody who passes on..

The party is now:

Our first Party was: