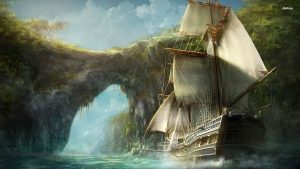 After the intro adventure to establish the charcters and provide a shared common background the main adeventure will be set on a self contained Island a couple of months away from any other major land mass. It is set in my own campaign universe (Arune) that I have been writing stories and adventures for various systems since the early 80’s

This large island (about 200 miles square in size) is a semi independent principality of the human Kingdom of Sha Tarbin in the “Empire” of Mengath on the mainland where you all originate from.

Travel to Rakhan Isle takes about six weeks by ship so is just long enough to put off the idle curious but not so long as to make trade a difficult thing. As mentioned elsewhere the Isle has not especially significant resources save its sought after herbs.

The capital of the isle is located upon the eastern shore and holds the prince governor’s residence. Typically the prince governor is a member of One of Mengath’s lesser nobility sometimes one that is in some small disgrace who needed to be gotten out of the way while some internal politics were settled. So as might be imagined the Prince governor is often an indolent figurehead while his officials run the actual day to day administration of the Island.

The Isle is then further divided into five “Thaneholds” that are each semi autonomous and ruled by retired nobles or other well placed authority figures. At least one of these is a particularly high level mage according to your sources. The exact borders of these Thaneholds is not known to you, it could be that they are reassigned periodically depending on how in favor there Thane is with the Prince Governor (or more likely his officials!)

You are headed for New Sandport on the far west of the Isle. It is the seat of one of the Thanes you do know one of the most minor or more accurately “Junior” ones his house having only been granted control of the Thanehold a few years ago. Evidently when the old seat was overrun by the Lizardmen savages of the Korm Salt marsh and estuary the ruling family lost a lot of prestige, and while they clung on for several years eventually the new Prince governor got to hear of it and ordered the Thanehold into the hands of a new noble family to restore the fortunes of the area.

The township you see before you is sturdily built certainly and you can’t see how a savage tribe of Lizard folk would ever take this fortress, you reason that if thats the work of the new Thane then he has at least established a safe haven for the people.

The decentralised nature of the government here gives you your first clue why fugitives from Justice might come here. With the reigns of power so divided from Prince Governor to officials and the Officials to the Thanes (and their henchmen) it could take quite some time for Official word of a person’s crimes to get down to the general populace. And an astute operator could use that delay to gain themselves a following or attach themselves to a mighty local patron that could shield them from the Official dispensers of the King’s justice.

However independent operators like yourselves neatly sidestep the elaborate power-brokerage that has grown up in the “Court” of the Prince Governor. Perhaps your guilds patrons hope that you will be able to get in and deliver justice before any corrupted local magistrate can move to stop you…. ????