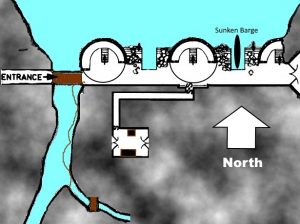 So smaller write up here as we split the time between finishing off the levelling process and changing scenes. But I want to keep these going if I can.

From the prow of the fishing ship the distant coast that once held the Sandlanders settlement slowly cam into focus. Three, well two and a partial tower sat in the mouth of what appeared to be a sea grotto. The captain steered the boat towards one of the two barge bays all the while nervously looking at the water about the ship. He explained that it was not uncommon for lizard folk to attack ships that ventured too close to this shore and that as soon as the troop was disembarked he’d retreat further back into the bay.

“Climb one o those towers..” he began “… light a lamp at the highest point and I’ll no to come an’ fetch ye. But I’ll not stay closer than a mile otherwise.”

“We’ll take care of that.” Grimwarden grunted squinting at the two remaining towers. The cranky Dwarf possibly assessing them for the most structurally sound.

Joseph, Felix and Tem began to examine the main doorway in detail. It was a large affair some 20′ high festooned with the Bone & flame motief of the local cult, now the once grand decoration was sadly weatherbeaten. But still traces of bright paint glinted from portions of the carved stone. Arvid seemed more interested in the western entrance and the rickety bridge leading to the coastal path for now. Phaedra stood in the middle of the wharf, hooded as always but seemingly watching everything from beneath her shoud. Mogar glanced about looking for enemies perhaps, and they all threw more than one suspicious glance at the half concealed and temptingly half open set of double doors on the seaward side of the wharf. The darkness of the temple interior awaited. But nobody wanted to try the obvious route it seemed!

“Ah hah!” came the cry from the fellows by the door. A small perhaps three foot square section in the doors lower right section had come away revealing a small compartment and a leaver. Fastening a rope to the leaver Joseph pulled it fully flat to the floor, and from somewhere to the east a dull rumbling vibration as of stone shifting could be just made out. Could it be they had disarmed a trap on the most obvious way in?

“Wait there is more inside!” Someone said as Temerian half stooped into the compartment and did something within. “Second secret door inside..” the Taciturn elf half explained to the rest.

It was true the back of the Leaver compartment had come away revealing a crawl space. “I’ll never get down that little hole” grunted Mogar eyeing it suspiciously. “Well maybe if you took of all that heavy gear you might just…” Mogar glared daggers at the group. Clearly the idea of taking his armour off wasn’t sitting easily with the warrior!

“I can manage easily enough!” chirped little Felix. The halfling barely had to bow his head to walk into the smaller space.

“Not much it turns west and heads deeper in as far as I can make out.” he replied. “I’ll explore!” Without further ado the alfling edged into the small passage way.

“I can fit as well” declared Tem, the wirey elf dropping to his knees and squirming in after the Hobbit.

“I as well” Phaedra stated abruptly. The small woman also following Temerian on her knees into the darkness.

“Leave them, I have found the true way inside!” Arvid half cackles from the edge of the wharf. Joseph & Mogar stomped over to where the strange cleric was gesticulating expansively. “See I thought there would be a passage. Did not the local priests say the place was overrun after an earth tremor? The great Godz whom I serve revealed to me that there had then to be a crack int he stone through wish their enemies entered! We may do the same!” he said triumphantly.

“You might not have to big guy” Jospeh grinned unspooling a length of rope. “I can rig up something to help you I think. Gimme a minute or two” Swiftly the rogue clambered out on the fractured and uneven rock of the grotto. Every ten feet or so he paused to bash a spike deep into the grotto’s sea weathered stone.

At the edge of the visible fissure he paused. “Yeah goes in as far as I can make out. Gonna need torches or something from here on in.”

“Go on nimble one!” Declared Arvid. “The Lord of light that I serve will guide our way” Recklessly the strange cleric sprang onto the rock clinging to the line tied to the rock wall. At the edge he paused and muttered something strange and a glowing disc began to hover int he air near Joseph and he edged deeper into the dark water floored crevice.

“Yeah, now I see it there is a side passage that heads towards wherever that big door woulda led I’d guess” Joseph stated squinting in the passage now illuminated by the Clerics light.

“We head towards that then!” Exalted Arvid.

In a few moments more the three of them clung to the rock by the side passage. Looking at the way the water flowed over the stony bed it was clear that the water of this passage was maybe 4’ deep only. Suddenly Arvid slipped and demonstrated the depth. Chest high the priests fervour seemed undampened. And instead slowly he rose upon his glowing disk out of the water and int the passage way.

“Look some crafted structure my friends!” He cried pointing up at what appeared to be wooden panels set near the ceiling of the fissure.

Felix snuck forward happily along the rough hewn passageway. Really this wasn’t much smaller than uncle Jeremiah’s closet he had hidden in as a lad. Edging up to the first twist in the passage he peered cautiously around the edge. But there was nothing to see. Still the crudely made crawl-way edged deeper into the side of the cliff. Behind him the quiet elf and equally Taciturn human woman toiled along on their hands and knees. The bells and bones of Phaedra’s stick making the loudest sound in the confined space… She never felt nervous yet she felt as if she was being followed, but she could neither turn nor hear anything behind her in the cramped darkness.

“Going south now I think?” He whispered over his shoulder and carried on. But only a few steps revealed the depressing site of the diggings end. “Looks like a dead end chaps – sorry!” Felix stated apparently unconcerned that if true there wee now two big ungainly types between him and the way out!

“Unlikely” Stated Temerian. “I shall look. I lie flat and you climb over me so I may see.” Obediently Felix clambered across the supine elf. Trying ever so hard not to laugh as he did so.

“Yes I see it, it was above your eye Halfling” the ELf declared reaching up near the top of the crawlspace. A faint jingle of a chain was the only warning as another panel abruptly dropped out of the wall to one side. Tumbling into the revealed room Temerain looked about. It was some sort of chamber. Not crudely fashioned as the crawl-way but obviously well made. But more importantly he now faced a half naked man who was turning about in startled surprise at his sudden appearance.

From one knee Tem took in the battered sleeping cot behind the man and the struggling figure of what seemed to be a female cruelly tied to it. It seems his appearance had interrupted villainy most foul! Observing the man flailing for the giant sword leaning against the wall near him Temerian brought his powers to play and a shield of force sheathed his form.

With an Oath the foul looking man charged forward and smashed his blade down on Temerians head. With an actinic flash the mage’s ward held and the deadly edge stopped short of taking the elf’s head off. Dropping into the room little Felix stared at the combatants. “That’s not very nice!” he said sadly “Why can’t we talk this out?” he muttered wistfully.

“This not nice man he hurt woman!” Tem snapped back irritated perhaps at the innocent Halflings naivety. “Be nice to her and stop him!”

“Oh Ok!” stated Felix drawing his knife and stabbing at the mans waist.

Tem drew his quill and sketched a symbol into the air. A moment later the pock facd ravager was sprawling back as two blasts of eldrich force. Shaking his head the warrior braced himself to spring back when suddenly he stiffened. Two slim steel needles protruding from his shoulder and neck. Silently Phaedra observed the dieing man before retrieving her thrown darts.

Ok close enough. To any unrelated reader. Yes they really have split into two parts. And no I don’t know how best to reunite them at this point…!