Right part two. Hopefully this will finish the retelling of the session. I may feel like doing an “epilogue” post just for my own amusement as well. 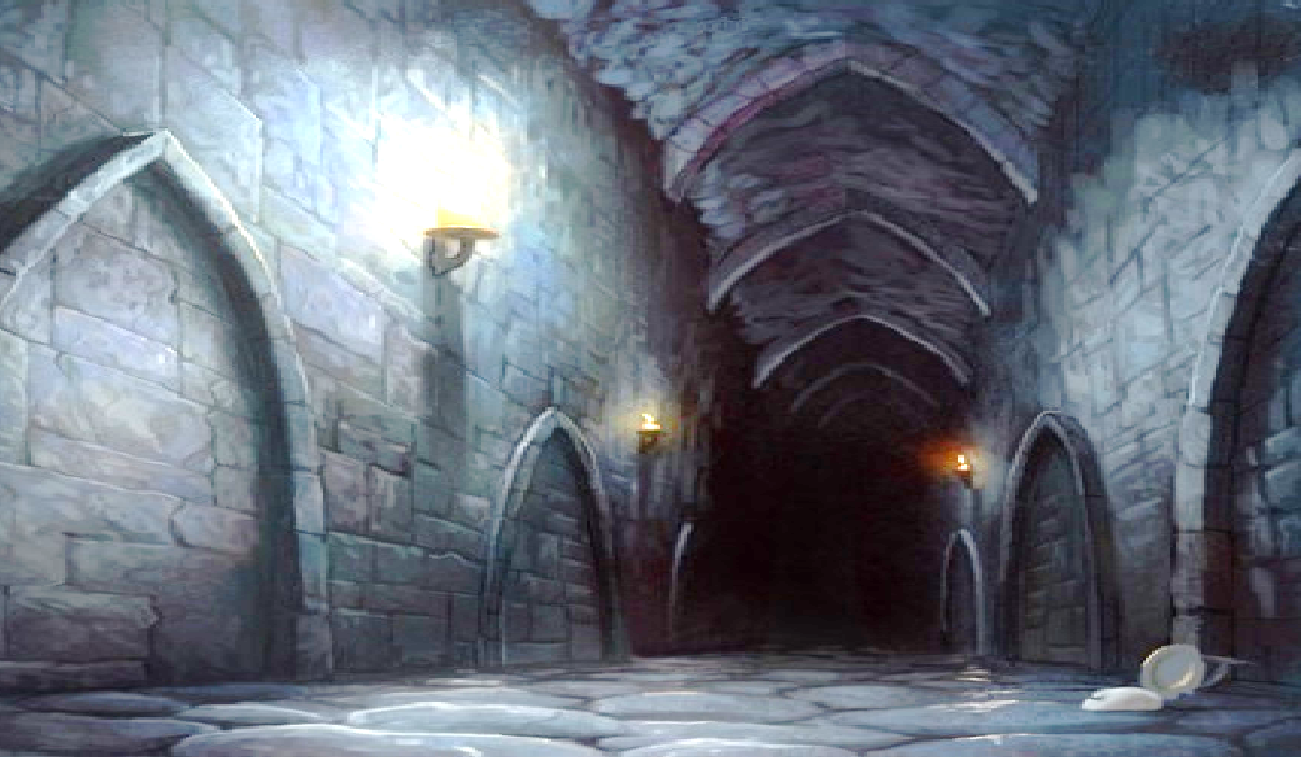 Meanwhile Joseph seeing the thing starting to rise and Phaedra flat out on the floor nearby him grabbed the frail looking woman and began shaking her awake. “C’mon girl we need you!” he shouted, with a start the clerics eyes popped open.

Felix watched Mogar pick Dark Odo over his shoulder with interest. Oh he was being nice and wrestling her to the ground instead of slashing her with that big sword of his, he thought. But no just as the diabolic flying lady got up again Mogar disappeared around the corner. Confused the halfling same mr Temerian coming up with a look of great concentration on his narrow feature. Oh well that was always interesting to watch! Felix liked the pretty colours the Magicians spells made so quietly he followed the mage around the corner.

Violet red fire bloomed catching the creatures attention but with little effect other than to make it swoop in on them!

“Awe crap!” Cried Rats, “Somebody remind me to get some silver bolts if we get outta this!” he said to nobody in particular.

Temerian had reached the corner. His frail body protesting at the effort and his aching head protesting at the effort of holding one more spell in check till he was ready. Around him was the corpses of the enchantresses remaining mortal henchmen, but ahead was Mogar carrying thier quarry away once more, no more…! Spotting Felix by his side he caught the Halflings eye and nodded to the retreating Mogar. With a wracking cough he spat out blood along with the trigger incantation. A searing blast of violet light speared out and literally blew Dark Odo’s body off Mogars back. The Witch had to be dead. Her creation might withstand such a blast but no mortal surely! Termerian thought as he sank to the floor exhausted, every nerve screaming with the magical feed back.

Thrown aganst the wall as his sister was knocked from his back by the blast Mogar stared uncomprehendingly as her headless form slammed against the opposite wall. Gripping his sword he vowed somebody would pay! Looking back the way he had come he saw a Boney Wizard and a small Goblin with twin Axes laughing back at him. Gettign back to his feet he got ready to charge.

The winged creature swooped down on where rats and Lucious stood. Shoving the blind mage one way Rats dived the other as the creature raked where they had stood with its talons. He had nothing to hurt the thing he was sure, and the Sorcerers fire left barely a mark. The thing was hurt, maybe badly but very much alive and foaming at the mouth with vengeance for the previous indignities heaped upon it.

Shaking off the magical slumber Phaedra saw the creature had at last thrown off her enchantment. She tried again but either she was still under the lingering effects of the sleep or it resisted her. Wracking her brain for another option she saw it swoop down on the blinded Lucius…

… only for its claws to pass right through him as its form turned transparent as it lost its contact with the material plane. Writing and cursing in its diabolic tongue the thing faded from view till not even a wisp of it remained.

“Is everyone alright?” She asked looking around.

“How is Mogar?” Temerian croaked from the floor to the halfling by his side.

Mogar did indeed feel strange, the goblin and wizard had gone probably vanquished by his friends Tem & Felix that had evidently gotten to them before he did. Good job. Not being one to dwell on such things he took a moment to look around him. The near headless remains of Dark Odo’s body lay close by, but so did a couple of dozen small Orc like creatures. Judging by their wounds the winged beastie had ripped them apart shortly before he arrived. Sad but such was existence. “Hey! You all come here there is some kind of ransacked camp here!” he called to the others.

By ones and twos the exhausted adventurers made their way to the corner of the passages where as Mogar said some battle had been fought between the Winged creature and some lesser Orcs of some sort. Looking at the grisly wounds many of them displayed (in many cases their eyes had been ripped from their heads) A search of the assorted bodies did turn up a bit of loot, a good few coins and most importanly for Lucius & Temerian a pair of spell books!

Phaedra also found a book on the body of the largest looking Orc, it was written in Goblinkind and she almost broke into laughter as she read the title. Managing to stifle her reaction back to a single chuckle she pocketed it. Perhaps she’s show it to select others in the group in due course but for now at leas tone person had to be kept in the dark of its nature!

“Huh not much loot on her for a ‘powerful mage’!” Joseph spat disgustedly as the last of the meagre coin was counted.

“Yeah true that,” commented Rats. “Question is why’d she flee this way not to get aid of the Orcs as she slaughtered them all. Maybe her horde is nearby but she didn’t get a chance to retrieve it?”

“Possibly, but I can think of another reason” Temerian coughed from where he lay propped against the wall. “She needed some place to summon that, that Demonic woman. Where better than in the middle of a crypt for dark magic?”

“Logical, my elven friend” agreed Lucius from where he sat still hugging one of the spell books, sightlessly pawing at it like a cat.

Phaedra sighed, she would need to fast and pray to heal the dark ones affliction soon enough. She had hoped that with the creatures banishment the blinding spell would also fade, but alas it wa snot going to be that easy. Rising to her feet she spoke.

“We have set out what we came to do it is true but there is much more to explore here. Something is worng here, has no one else wondered why the Lizard folks did not simple take over this perfectly serviceable complex when they took it from the Sandlanders? No there is a mystery here yet that I would see the end of.

“Dunno about mysteries but we did the job but I like Magee’s point about loot!” Joseph said, turning to Temerian, “You got a good point too, dunno much about magic but that makes sense but also means that she didn’t think she’d be disturbed here so a quiet place is a good place to hide your stash. I’m gonna take a look around here while you guys gather your strength. Whose coming with me?

Leaving the Exhausted mages in the care of Felix the four remaining party members spread out along the encircling corridor looking for anything out of the ordinary among the ever present burial niches. Logically Dark Odo might have hidden something in one of the empty ones, but chances were she wouldn’t have sealed it up as well as the originals.

While he and Rats searched near the northen end of the passage Mogar jumped as he heard Phaedra’s cry of pain. Grabbing his sword he charged past the skeleton statue with Rats coming up behind him cocking his crossbow as he ran.

At the clerics cry Joseph spun away from the niche he was searching. Standing behind and leaning over the small woman was a gigantic spider! One of its fangs dug deep into her shoulder! With no time to draw his bow he summoned up his courage and slashed at the thing with his sword scoring a narrow cut on the things body. By no means a fatal wound it was enough to make the great hairy beast take a scuttling step away from the wounded woman..

Phaedra grabbed for her holy symbol with one hand and her wound with the other. She could feel the spiders venom already working its way into her. Sobbing an invocation to the three-who-are-one she sagged as the healing energies coursed through her purging the venom.

The spider bit back at Joseph, clipping him, just before Rat’s bolt goosed if from behind. The thing scuttled around just in time for Mogars sword to smash through one of its eyes dashing it to the ground!

When these new wounds were treated Rats ans Joseph managed to trace the spiders faint trail back to the opposite hall way to where they had been searching. Sure enough after twenty or so feet the walls of the passage became increasingly choked with webs as they lead to the corner of the passage. Gingerly they burned away what they could, there was no sign of more spiders but evidently it had been around for some time as the flames revealed bones and traces of equipment. Leaving the smouldering flames to clear the lair out the party took council.

“It is clear there are other dangers still” Temerian began, “I and Master Lucius are wounded and our powers at ebb..”

“Speak for yourself elfling my powers are great still!” Lucius objected.

“But you are wounded.” Tem replied evenly. “We at least should return to camp.”

“I am tired of this place as well!” Felix piped up.

“Hmm we have done what we were asked to do that’s all that counts. Not much point in risking more if we’re not being paid for it” Joseph shrugged. “I’ll go back with Felix and the wizards, I’ll make the formal report while they rest.”

“There is mystery here still” Phaedra said quietly, “I would see what it is.” she replied simply, Mogar simply nodded in agreement with the Witch woman.

“Yeah I been stuck out side shooting Lizardmen while you guys explored” grumbled Rats Magee, “I’d like at least a bit more look around”

And that’s where I’ll leave this narrative chunk. With the party dividing with the wounded and exhausted making it back to base camp & the remaining three to take a little look about still. I know the session did carry on just a little further but this is the better break point narratively speaking I think. Definitely need an “Epilogue post” though.