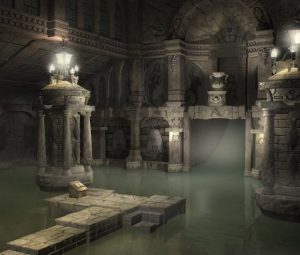 “Wounded coming through!” Joseph Pope hollered to the guards outside the main doors.

Grimwardens men scrambled to ope the heavy stone door a little wider as he helped the blinded Lucious through them and into the sunlit docks area. Behind them Felix led Termerian stumbling and shaking from the magic drain on his system into the arms of another of the mercenary band.

When the two mages had been led to the ruined tower the rest of the band had set up as a base. Grimwarden pulled Joseph aside. “Ok recruit, what happened in there? Did you get the last target? Where are the others, and who the hell is the blind guy!”

Joseph shook his head, it was not like he wasn’t tired or nothing: But the dwarf wasn’t going to stop till he had an answer so he straightened himself as best he could and put on his most winning smile:

“Yes. No idea they were right behind us. He was trapped in there and helped us out. Last thing Dark Odo conjured hurt his eyes I think. I could use a beer right now, as well boss.”

Grimwarden blinked. Maybe unused to what he considered a wet behind the ears newbie talking back to him so bluntly. The the dwarfs craggy face cracked a smile. With a thump on the back that nearly made Joseph sprawl on the floor he grinned at the man. “oh course ye do! right come sit with me and fill me in. You got the main mark that’s the main thing indeed!” Drawing Joseph to his spot by the fire he grabbed a couple of guards. “You two take a peek back inside see if you can round up the stragglers. Got it!?”

A few minutes later the strangely ebullient dwarf handed Joseph a leather travel tankard of cheap ale. “Right tell me every thing, you got proof of her death I take it?”

Joseph nodded as he drank the brew down.

“Good fetch it out and I’ll show ye a little trick we were given” Unrolling an ornate looking vellum scroll he read the names “Dark Odo” and “Vivlock the foul” aloud over the grisly trophies. As he spoke their names an ethereal voice echoed from the scroll. “Deceased! Justice served”

“Master Zathabar gave me that to verify things and so we can collect our bounty from whatever local authority that recognises the kings warrant is in where we are.” he explained. “Now fill me in, between sips o course!”

Dutifully Joseph retold the scout teams adventures including the final take down of the rogue apprentice mage and her creatures. Nodding Grimawrden seemed pleased.

“Not bad both targets down fer only one loss of our own, though a couple of the lads out here got a scratch or two as well. Shame about Arvid, but so it goes in this game. You think that dark sorcerer would sign on for a bit to replace ‘im?”

Joseph thought it over. He wasn’t sure that would be a good thing judging by the mans unpredictable nature but instead he just nodded. “I don’t know how much use he’d be right now I think the thing at the end got his sight.”

Grimwarden just smiled. “Ah well thats not too much of an issue. I expect I c’n heal that with a bit o prayer though I’ve a mind to let Phaedra have a crack at it first as she’s late coming back. I’m thinking we may need more magical back up as I see the elf’s gone and done for himself!” he said with a laugh.

“Oh I seen that look before in spell casters, tap your own life energies too hard and too fast for their unholy arts and it leaves you weak as a kitten for days. I was planning on a week or so’s R’n’R when we get back to NewSandport but I suspect even with that Tem may be needing to take a back seat a while longer by the look of him? We’ll see.”

As I mentioned as an aside the other night, I was fully intending to grant you all a weeks down time to justify training/healing/examining treasure etc. Temerian does have severe spell burn and probably wont be 100% after a week. So as Dave & Matt suggested they might want to take alternate characters out for a spin this seems like a good way of putting Tem/Felix or anyone onto the reserve list for a session or two as you wish. Just bear in mind that secondary characters will be a shade behind principles in XP and that the adventure is based on the fact that the majority of you will be 2nd level. It may be you will be able to just level before you hit the main thread of the next arc but you cant count on that so I suggest no more than half of you change out characters.