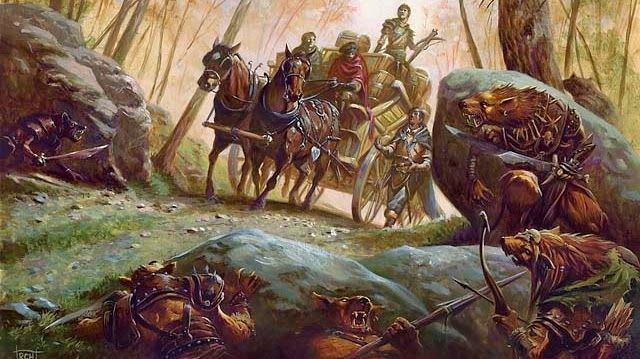 The days passed slowly for some while others were filled with activity. The dwarves in the warband lead by Auri especially seemed to finally have recovered from the voyage to the island and had taken over the inspection and resale or renovation of the salvaged arms and armour from the ruins of the Sandlanders Temple.

After a day or so’s intensive rest the injured magicians were back on their feet. Though in Temerians case it was merely to collect some rations before flopping back into his bed perhaps with a book but more often than not the Elf merely tranced and recuperated.

Lucious was a bit more in evidence. The dark skinned warlock seemed to have made a faster recovery once his eyesight returned. Though the addion of a velvet eye patch did nothing to soften his sinster aspect.

Phaedra was always present in the group. In fact some of the other troopers were begging to get a little spooked as they said every time they turned about there she was silently watching them never saying. After a quiet word from Grimwarden the young mysterious woman instead dissapeared from camp early in the morning to return quite late carrign arm fuls of herbs. Dissapearign into her quarters chanting and invocations could be heard late into the evening. But each day she appeaered with a few vials of healing balm as the results of her efforts. Much more greatful of her now the mercinaries eventualy ignored her as she stood standing watching – judgeing them as they went about thier assigned tasks.

Mogar managed to find a captain that was sailing back to the mainland and had pressed a packet of letters for his family. Hearing the package “chink” revealingly Grimwarden took the big guy aside and gently explained that while it was a fine thing he was doing for his old Mama if he wanted master Zathabar would send part of his wages on to his relatives. Happy at the thought the warrior went back to practising with his new gear.

Joseph Pope surveyed all this from his rooms mainly. His focus was on the road ahead. he’d heard a few rumors and ferreted out a few more. Calling for some more parchment he penned another letter…

At the end of the week the entire warband assembled in the town square. The band had aquired a cart and a couple of spare horses but in the main the troop was packed for marching in decent military order. In fact the sudden display of martial competence had caught the eye of the town guards who non too subtly observed the muster albeit at a respectful distance.

When the troop stood ready Grimwarden cracked them a smile and shook his head. “awe fer gawds sake try and look less green ye boogers! Stand easy ya asshols.” Crackin open a firkin of Ale he took a deep pull then passed it to the next trooper.

“Alright we’re orf from this… nice township. As mosta ye know we got leads saying some of our targets have taken up with the Thane of the next district. Some may even hae signed on wi’ him as gaurds an the like. If so we gotta go a bit careful like. Still and me an master Joseph have discussed if the Thane up there isn’t totally stupid we can make him see that his new recruits have a few bad ‘un in with ’em. As long as we play it cool we should be able to bag at least a couple of them. So I want ye on yer best manners when we get there cause no offence with the local authorities or ye’ll get me boot up yer arse! ” He looked at Jospeh pope. “Anything to add Master?” he asked in a middlin’ respectful tone to the groups brevet leader.

Joseph looked a little nervous as he stepped up. Being right out in th eopen didnt sit well with him. “Not much Master Grimwarden, just this. The Thane up there is a Mage of sorts so take no chances. I heaer there is a growing Bandit problem up there which might be why he hired a bunch more gaurd Or it might be our targets are th ebandits. So we find out the lay of the  land then we act. That’s all”

“Fair enough,” Grimwarden agreed. “Well looks like three days march maybe just two is we step lively and master elf in there.” He stuck a thick finger out in the direction of the Covered wagon “gets his beauty sleep. Stay alert and lets be on the way!”

The group had been on the road for maybe four five hours when the the forward scouts called a halt.

“Take a look” Rats replied laconically indicating the scuffed ground ahead of them. Squatting down Jospeh could see the definite impressions of tracks crossing the road at right angles. Glancing to the side of the road he could now a group had left the high grassy fields on one side of the track and crossed over to the next just ahead of them.

“Who and how many you think”?

“Ah easy that one seen plent of tracks like that last week or two. Lizard folk a buncha them but trying to make their numbers seem smaller I deem.”

Joseph thought a moment. “Ok you two go follow the tracks for a few minutes see if you can determine thier numbers just don’t get seen!”

“No fear of that!” Rats agreed “C’mon smelly lets take a look see”

Returning to th wagon in the center of the group Jospeh explained what had been found to the rest of the group. “I figure we wait up a few minutes – no more than an hour and see what the scouts find out. I’m not having a large force of Lizard people wandering about unless i have at least an idea where they are!”

“Right” agreed Grimwarden. “Ok Lads eight pickets on alert one with a bow one with a shield in front of them. Compass point watch. Get to it!”

Forty minute or so later Rats and Boggis slipped back into camp. “Well we seen ’em at a distance about 50 of the Lizard folk heading back towards the Town we came from.”

“You sure they are not going to double back on us then?”

“Nah cant be sure o that without being close enough to hear ’em. But I saw no sign, this was a raiding party alright then had plenty of empty sacks stuffed in packs and lots rope. I figure they were gonna plunder a farm or two maybe scare the town, but there’s not enough of them to take those walls.”

“As long as there not on our tails.”

“But what of the people in the town?”

“We’re not on retainer for them so what?”

“Ok can we get a message back to them without gettin’ caught?”

“Leave that to me!” Termerian interjected from the edge of the Wagon “I need to practice I suppose”

Once the magician had sent the Guard of Newsandport a warning the Warband again set out. A few hours later the group pulled just to the side of the road and set up a camp for the night on a flat piece of ground on the edge of a small copse of woods.

“Ok I want constant watches over night” Joesph Pope declared once the horses were tied up and the beginnings of a camp fire going. “Two folks every four hours overlapping”

Some time later Mogar and Boggis were staring morosely out into the empty still countryside. When a strange noise got Boggis’ attention. Stumbling towards it he suddenly felt the ground dissappear beneath his feet. “Help!” he cried as the ground swallowed him hole (Pun Intended).

Mogar rushed over just in time to see a whitish blur in the sky silhouetted against the waxing moon. Effortlessly the Owl floated past him to disappear into the nearby trees.

Scrambling to the edge of a rough pit Mogars nostrils wrinkled at the aroma wafting up from below. “Quick get me out!” Boggis cried all the louder waking some of the camp.

“Trust you to find a latrine pit!” Mogar grunted as he heaved the man back to the surface. “How do you stand that smell?”

In the light of Morning the warband could see a few other signs that there camp site had been used at some point before them. Not terribly recently but clearly the copse beside the highway was popular among travellers.

The day wore on and they made good progress. it was interesting to see the landscape slowly get less dry and barren with more and more trees staring to be in evidence. As much as the group enjoyed this it slowly came to them that the land was strangely empty, less wildlife was in evidence than you’d expect for the growing verdantcy of the landscape? Likewise, for a busy route between districts the fact they were yet to come across any other travellers was perhaps noteworthy as well.

Though to be fair anyone seeing a two dozen strong band of warriors might think it a good idea to go hide in the bushes while they went by…!

Just after mid afternoon Temerian’s Meditations were disturbed once more. Not this time from any of his oafish companions hollering but by his own familiar. The nightmarish creature began crooning to itself and swaying irritatingly from side to side. Sensing no fear only… ‘admiration?(!)” emanating from it Tem eventually had to demand an explanation.

“Well! what ails you creature” he ordered; dimly realising he perhaps ought to give the parody of a horse and giuant bat an actual name sometime.

“ohh my master..” It crooned “Something lies ahead of my order, my home. Strong and full of shadows” it thought back at him.

Suddenly alarmed he asked: “What of your order. What mean you? Demon kind?”

The creature hesitated. “No but they dwell in the abyssal shadows that I can feel but I know them not” it replied a little more calmly.

Cursing the interruption Temerian summoned the others, and explained the news.

“Hmm well I’m not going to run into a demon thing either” Joseph exclaimed. “Any volunteers see what the little creature thinks he feels?”

Auri Bormir Lucious and Donny crept forward. A half mil;e down the road they could make out a pair of wagons, but they were not camped. No they were skewed crazily across the path. A road block maybe?

Auri unshipped his spyglass and took a closer look. Two thin gangling creatures with over large heads and hand flittered between the wagons on huge leathery wings. no more than man high they were clearly not like the Huge eyeless Demonic thing the others had fought in the temple.

Hurredly describing what he saw to his fellow he suggested carefully advancing from the flanks to….

“Chaaaaaarrgggeee…” screamed Bormir brandishing his weapons as the dwarf took off at full pelt down the road….

And there I’ll leave this as while we manged to play out the fight there was just a touch more in that scene I wanted to see played out before we move past it. Besides this narrative has gone on quite far enough for one post LOL!